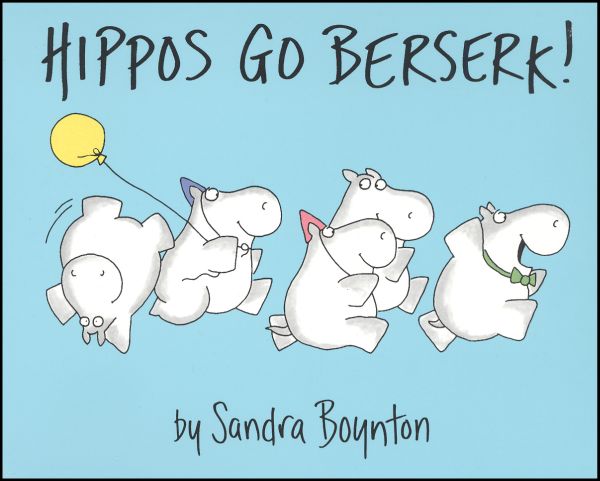 The book “Hippos Go Berserk” by Sandra Boynton is NOT a simple story about a single hippo who throws a party because he’s lonely, and it is NOT just a “silly counting book”.  On the contrary, Hippos Go Berserk is a story of intrigue, animosity, romance, some debauchery, and even a love triangle!  I kid you not.  Get comfortable, grab a drink, and get ready to have your mind blown.

A cursory reading would indicate that this story revolves primarily around a single hippo, the lonely protagonist who invites his friends over for an awesome party.  I would submit however ( and will back it up) that this story revolves not around the first hippo but rather around the beast, who showed up at the party as a guest of the 6 hippos.  How do I know this?  Well like all clever writers, Boynton doesn’t elude to any deeper meaning until the very last page:

“One hippo, alone once more … misses the other forty-four”

First off, the math major in me immediately wondered whether her math was right, and come to find out, it was … well sort of at least.

45 … only 45!  That was my first clue that Sandra was presenting more than meets the eye in this book.  The protagonist (one of the 45 hippos) misses the other 44 … but there were 45 “entities” at the party!!!!!  Sure, there were 44 hippos but the 6 hippos brought a guest with them making a total of 45 partiers (not including the first hippo of course).  The first hippo for reasons that I will delve into shortly does not in fact miss the guest, later referred to as a beast (again, this will be discussed shortly).  And this is where the intrigue of Hippos Go Berserk really kicks into high gear.

Boynton, the master storyteller that she is, leaves the reader with more questions at the end of the book that there were at the start.  All the hippos are gone but the actual story is not resolved.  One thing is certain however, the original hippo never liked the beast.  The beast was obviously not originally invited by hippo #1 and although described as a “guest”, was most certainly not a welcomed guest.

Allow me to draw your attention to the page when the 6 hippos arrive at the party.  When the guest/beast enters with the 6 hippos, there is a palpable tension between him and the protagonist hippo.  The hippo is obviously surprised to see the beast.  The hippo looks back, almost as if he’s doing a double take as the beast and the 6 hippos enter the house.  Presumably hippo #1 didn’t see the beast as the other 6 hippos entered.  The 6 hippos most likely blocked the view as they walked in two by two.  Once the 6 hippos and guest got through the door, the beast said something to the protagonist, waved, and flashed his famous wide, toothy grin almost as if to say “I’m back sucker!!!!  I hope you’re ready for me!”  The hippo had been looking out the door, probably at the huge sack on the front lawn containing 7 hippos, and had to turn his head back when the beast called out to him.  That would explain why he is not following the 6 hippos into the house like most good hosts would be doing, he is preparing to greet the next arrivals or just confused about a huge sack on his front lawn.  The picture of the protagonist hippo’s mother on the wall behind the 6 hippos ominously foreshadows the destruction that will be caused later by the guest … AKA beast.

The party scene where all the hippos finally go berserk is where the beast really shows his true self and it is here that Sandra explains why the protagonist hippo hates the beast.  (Note: this page is crucial to many of the subplots in this work and I will be referring back to it regularly).  I don’t know about you but I absolutely hate it when uninvited guests come to my house and tear pictures off of my wall … especially pictures of my mom!  No wonder the host hippo is pissed off!  There is another what I call “non-descript” hippo (as opposed to a hippo with a distinguishing characteristic like a bow, clothes, or a balloon) that is helping the beast tear down the picture, probably one of the 6 that the beast originally came with.

In the second party scene, the beast can be seen looking out the window.  It’s hard for me to tell if the look in his eye is a “crazed and delusional” look or a look of remorse.  It’s fairly apparent that at some point during the party, someone gave the beast a piece of their mind.  My guess is that the host hippo angrily confronted him after the “wall hanging incident” and kicked him out of the house.  The beast responded that it was dark outside and he had no way to get home.  To which the acquiesced and let him stay on the condition that he leave as soon as possible after the break of day.  The result?  The beast is among the first tranche of hippos to leave the party along with the hired help and 8 non-descript hippos that all headed east in a bus.  In true beast form, the guest of Hippos Go Berserk has made a few more enemies this night and truly deserves his new name … The Beast.

Sandra Boynton is not one to leave her readers wanting more.  Thus, she weaves in yet another substory slightly more subtle than even the story of the beast.  This story involves two hippos that started out the evening in love and ironically, had it not been for the beast, would have left the party as disillusioned ex-lovers.

The first two hippos that the original lonely hippo called are obviously a couple (possibly married but this is uncertain), and more importantly they are BOTH independently friends with the original hippo, and good friends at that.  When hippo #1 calls them they BOTH want to talk to him … at the same time!  This is one of those situations where three people hang out and then two start dating but they all remain good friends.  But it is actually more than that, there is no question in my mind that the female of the couple STILL HAS FEELINGS FOR THE HOST HIPPO!  I’m not making this up.  If you turn back to party page #1 when the hippos are all going berserk, what is the female of the couple doing?  Well she’s peering over the door down at the host!  Talk about a love triangle.  How do I know it’s her?  Well she is what I call an “identified hippo”, meaning that she has a distinguishing characteristic.  In this case, the flower in her hair.  But how do I know that she’s checking out the host?  He is actually non-descript but he is still tending the door as a good host should PLUS, he is wringing his hands as the picture of his mother is getting ripped off of the wall?  No other hippos on the party page seem to care that this expensive and sentimental picture is getting destroyed except for the hippo that is a) standing by the open door and b) getting ogled by the hippo with the flower in her hair!  Based on concrete evidence, that is the host hippo.

So the female of the original two hippos is the only unfaithful one … right?  Wrong!  The male of that couple is totally checking out one of the 5 hippos that came overdressed.  At this point it should be obvious that the two may have arrived together but it is far from certain that they will be leaving together.  It’s tough to tell what is happening with our “unfaithful” couple in party scent #2.  The male of the couple is talking to a non-descript hippo and the female is not to my knowledge shown in that scene.

So what happens to our “unfaithful” couple?  Well the female, annoyed that the host hippo is more concerned with preventing further damage to his house and scolding the beast, makes her way back to her boyfriend hippo and they … well how should I put it, this is a kids book after all.  Suffice it to say they have an enjoyable evening together and leave hastily, the female pushing the male in a wheelbarrow.  You may say to me at this point, “Matt, how do you know they had an enjoyable evening?  You’re probably making that up”.  If you thought this, you would be wrong.  In the wheelbarrow scene, the female is clearly pictured WITHOUT HER TELLTALE FLOWER!  She’s been deflowered!  Subtle messaging from Ms. Boynton if you ask me!

Like any good author, Sandra leaves certain aspects of what really happened at that party up to interpretation.  For instance, it is possible (although I believe unlikely) that the male of the original two actually left with a different female.  That would explain the haste with which they are leaving the party.  I find that unlikely because no other hippos leaving the party are wearing the flower.  Plus, the male was ogling one of the overdressed hippos and they clearly all leave together.  It is also possible that the female of the original two was “deflowered” by the host but unlike all of my other theories, there really isn’t too much evidence to back that up.

You might think have WAY too much time on my hands to have analyzed this book so thoroughly, and you might be right.  However, the vast majority of my “research time” was spent reading this book hundreds of times, first to Andrew and Dylan Mason, and then to my daughter Georgianna.  In my mind, there are not too many better ways to spend time than reading books to kids.

Lastly, when you’re reading this book to your kids, and you get to the part when the hippos go berserk, say “ALL THE HIPPOS GO BERSERK!!!!!!!!” and shake the book around and bounce them around on your lap and maybe even wrestle with them on the sofa … kids love that stuff and they start anticipating that page.  It’s a lot of fun.

Oh, and Sandra, I hope you don’t mind my interpretation of your book.  Thanks for writing it.  It has provided hours on enjoyment in our household.

Appendix A – Responses to questions

Michael, a professor over at Wheaton College (the one is Massachusets, not Illinois) has posted a very interesting theory that the book Hippos Go Berserk is actually a forgery since the 6 hippos never actually left the party.  The line in the book goes “7 hippos heading west LEAVE 6 hippos quite distressed”.  His theory is that this glaring inconsistency proves that Boynton did not write this book, since she would never have allowed this to be published.  Fair enough.

I can’t really speak to the forgery allegations myself.  I can however speak to why the 6 hippos were distressed.  It’s clear that they were distressed because they were the ones that brought the guest/beast to the party originally!  We know the havoc that the beast caused and the 6 hippos feel rightly terrible for bringing such a terrible guest to an otherwise great party.

One of his commenters asked why the beast left with the 9 workers rather than with the original 6 but I think I’ve covered that sufficiently above.  The beast was basically banished after ruining the host’s picture and was compelled to leave the party as soon as possible.

Another of his commenters surmised that the two hippos never showed up at the party, he called them but they didn’t come.  Photographic evidence clearly shows otherwise as shown above.

If you have any other questions related to Hippos Go Berserk, please post them below.  Thanks.